"Fieldey did an awesome job on our pool mural. I was dead keen for an Esther Williams inspired piece, having loved watching her movies when growing up, however my husband wasn’t so sure.  Fieldey managed to please us both giving me Esther and also giving the piece a bit of edge for John with the shark. The research she put into the idea was amazing too, watching some of the old movies and really listening to and taking on board what both John and I wanted which was really quite different.  The end result we both just love it and can’t wait for the greenery around the pool to grow and frame the work. Highly recommended Fieldey she was super lovely to work with and just so so talented. Thank you Fieldey x"

Trish Temme, Australia
"The whole idea of painting something big on our courtyard wall came from my daughter Emma, who’s nine years old.  She had been studying street art at school, so one Sunday morning we went on a walking tour of Highgate and Mount Lawley to find as much street art as we could.  We used the wonderful map on streetsofperthwa.com as our guide, and stopped for coffee and ice cream along the way.  By lunchtime Emma had sore feet and a head full of new ideas about what street art might be.  It could be dayglo spray paint, or it could be meticulous brush strokes; it could be abstract or it could be figurative; it could be political and meaningful, or it could be fun and frivolous.  When we got home Emma said: ‘We should paint some street art on the wall in our courtyard.’

The courtyard of our house had been a bit of a forgotten space.  It had an outdoor table and some pot plants, but it was lit by only a single dim bulb, and had never been somewhere we’d wanted to sit.  It had always been on the list of improvement projects, but we’d somehow never got to it.  We decided that painting the wall would be a good way to kickstart the refurbishment of the courtyard.

We looked back over the photos we’d taken on our tour, and decided that our favourite was Santa Frida, in the laneway behind Grosvenor Road in Mount Lawley.  We liked Frida’s gaze: strong yet vulnerable.  We liked the bold use of colour, and the mash-up of influences: Mexican folk art, Hindu iconography, rock n roll and tattoos.
I’d imagined street artists to be secretive: skulking up dark alleyways with a hoodie hiding their face, keeping their identity secret like Banksy.  I wondered how we’d ever find who had painted Frida.  The website identified the artist as Fieldey, and it took just one google search to find her website and the page marked Commission an Artwork.  We sent her an email and discovered that she lived around the corner in Inglewood. A couple of days later she was in our courtyard looking at our wall.
My initial idea had been simply to commission new version of Santa Frida, complete with her four arms outstretched like the goddess Lakshmi.  I wanted the background to be a forest, to help create a little oasis of greenery in our courtyard with the pot plants.

Fieldey suggested the piece might be more personal if we made Emma the subject. Emma was a little wary, but I was keen.  I found a photo of her I’d taken the week before, eating ice cream at a pavement table.  Fieldey wanted to use it and to keep the ice cream, and asked if we could think of three other things that Emma could be holding.

We agreed an initial fee for concept art, and got a written estimate for the three days Fieldey reckoned it would take to paint the wall.  There would be some preparatory work required: the chosen wall was exposed brick and would need to be rendered and given time to cure.  I also wanted new lighting installed: festoon lights for ambience and spotlights to pick out the art work.  We penciled in a date two months ahead for the painting, which would give us plenty of time to develop the design and do the preparatory work.

I then bombarded Fieldey with source images:  Henri Rousseau’s jungle paintings; Millais’ pre-Raphaelite maidens; Botticelli’s Venus; Arthur Hughes’ Ophelia.  It took us a while to decide on the three other objects in Emma’s hands.  We chose a flower first, as a reference to Lakshmi.  Next we decided on a heart.  This was a reference to Frida, but also came from an image that Emma had drawn of her Octopus Heart: ‘because it grabs you and won’t let go’.  The final object was a pocket watch. Emma loves Alice in Wonderland and the watch was a symbol of Emma growing up: on the cusp between childhood and her teenage years.

Within a few days Fieldey took all these ideas and brought them together in a single concept image.  She nailed it first time. It had everything that I’d imagined: Emma as an enigmatic child of the forest: both innocent and wise, strong yet vulnerable.  It was fun and frivolous, but also had a spooky spiritual depth to it.

The electrician installed new lights and the plasterer came and rendered the wall.  I decided to paint the primer coat myself.  I went to my local paint shop and described what I was doing and asked for a recommendation.  I thought it was a strange request, but the guy didn’t bat an eye.  He asked who the artist was, and smiled when I told him.  He had bought a work on canvas from Fieldey, and knew the paints she preferred.  He sold me the right paint for the job.  I painted the wall and it felt good to be part of the process, however modestly.  It was a delicate balance: giving our input into the work but allowing Fieldey plenty of freedom to develop something in her unique style.

That afternoon Emma and I went for a milkshake and some hot chips at the Fez café in Mount Lawley, to look at Fieldey’s mural.   It began to feel that we were involved in something a little bigger than buying art to decorate our house.  It was a personal project that meant something to us, and gave us a sense of the neighbourhood extending into our home.

Emma loves to draw.  She fills sketchbooks and her desk is a mountain of paper and copic markers.  She is constantly disappointed that there is not enough drawing and free writing in her school day, and she gets frustrated when her teachers tell her that creativity is very nice, but not as important as her spelling and times-tables.  She was excited to meet a real artist.  On days when Fieldey was working at our house, Emma would come home from school and sit at the table in the courtyard with her sketchbook and watch Fieldey paint.  Emma asked her to look at her drawings. I could see her confidence swell when Fieldey told her to ignore those people trying to tell her what she should and shouldn’t draw, that she should draw whatever she liked; and to pay no attention to people who told her that he imagination was dark or that the things she drew were weird.
​
The work has been finished for a week and it has changed the whole aspect of our home: not just the courtyard but the whole house.  We haven’t just purchased a work of art, we have been on a journey that has resulted in a unique piece that has a narrative and meaning.  Our house somehow feels more of a home now."
​
Robert Schofield, Australia 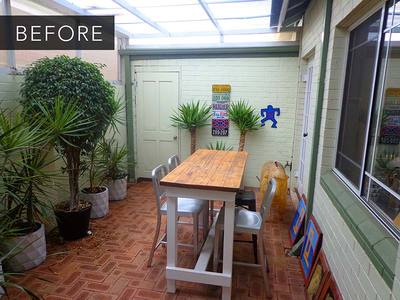 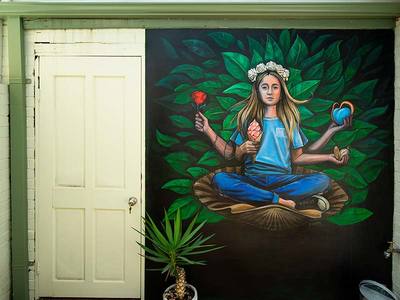